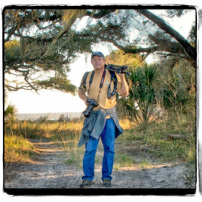 Stant Willie is a professional photographer and printer from Atlanta, Georgia.  He is President of Wilcor Graphics a commercial printer in the Atlanta area.  He has worked at Wilcor Graphics since 1975.

Stant’s photographs have won numerous awards including best of show several times at the Georgia National Fair. He has donated prints to many charities including the Ossabaw Island Foundation and the Marcus Institute.  His photography can be viewed at www.stantwillie.com.

Artist's Statement:
Photography has been a passion of mine since I was 13 years old.  I began by trying to make simple images of the moment using good technique.  Today I wish to convey a story of the moment and places I visit.  I particularly enjoy photographing environments that are rarely visited to show their natural beauty.

Photography is a great way to relive the moment over and over again. I want to share with other people the same emotions and sights that I witnessed at that particular time and place.  Photography allows me to appreciate nature and to bond with my fellow artists and friends.

Ossabaw Island is a wonderful place for all this to happen.  Thanks to the Ossabaw Island Foundation, I and other artists are permitted to explore this undisturbed island in ways that are just not possible at other locations.