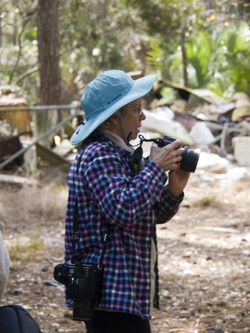 Paula Eubanks, a native Georgian, has enjoyed a dual career as both an artist and art educator with a BFA, MFA, and EdD from the University of Georgia.  She has taught photography at both the secondary and university levels, and recently retired from Georgia State University where she was an associate professor of art education.  She has published on a variety of topics, including an electronic textbook about pinhole photography called "Pinhole Possibilities" available through Amazon.

Paula has worked in black and white silver prints, type C color prints, hand-colored silver prints and digital media. Her work is sometimes three dimensional, moving forward from the picture plane by several inches to several feet.  Her subject matter is wide-ranging but throughout her career, she has consistently returned to the Georgia coast for inspiration and imagery.

Artist's Statement:
A Sea Grant first took me to Ossabaw in the early 199O's and I have returned frequently ever since.  Ossabaw is the most beautiful of the barrier islands with long bands of marsh that stretch as far as the eye can see and driftwood forests on its beaches.  For me its wilderness is a sanctuary, a place of consolation where humans are only visitors, where, in Thoreau’s words “all good things are wild and free.”

Manipulation of my photographs, sometimes cutting and pasting them into constructions. Photoshop has added a new dimension to that impulse resulting in a series of combination images that use Ossabaw’s architecture, landscapes and seascapes. My most recent work is about sea level and its inevitable rise.

I try for a relationship with the viewer, questioning and involving the viewer sometimes even providing narrative text.  My father’s military service with African-American WWII soldiers led to a recent interest in the holocaust, slavery and Jim Crow.  The Ossabaw Education Alliance’s conference and book African-American life in the Georgia low country, the Atlantic world and the Gullah Geechee provided material for an intersection between that interest and Ossabaw which I have explored in the visual book “Promises made and broken” about Mustapha Shaw, a freedman who was granted 40 acres and a mule on Ossabaw.