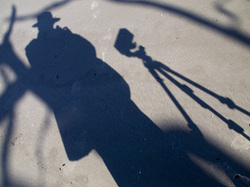 Jan Kapoor has been involved in fine art photography for many years, her primary interests being landscape, natural abstraction and still life.  She prints extensively in alternative processes including cyanotype and platinum/palladium.  Digital technology is another important creative tool in her work.  Kapoor uses medium and large format cameras, and has been drawn to specialize in pinhole imagery for the past several years.  She finds that pinhole is most expressive of the imperceptible passage of time, making visible that which is invisible to the ordinary eye, and of the mystery of non-human life that surrounds us.

Kapoor exhibits her work extensively: locally, nationally and internationally. Her work is in private collections throughout the world, and is also in several private and corporate collections in the United States.  She has published several books of her work, including The Intertidal World; Camera Obscura;  Japan: A Visual Journal; and Ossabaw Island.

Artist's Statement:
In February of 2009 I realized a long-held dream and made my first trip to Ossabaw Island, spending three days photographing with a small group of fellow artists, photographers and naturalists.  I love the coastal landscapes of the Southeast, and of Georgia in particular.  Of all the barrier islands I have visited so far, Ossabaw, with its varied and unspoiled landscapes, speaks most powerfully to me.

The images from this first trip were made through the use of Lensbaby optics on a digital SLR, as I attempted to express my wonder at the beauty of this world apart. On subsequent trips, I have been making images with several different pinhole cameras. For me, the pinhole aesthetic evokes the timeless, unique and magical qualities of the island.

When I come away from Ossabaw, I carry Ossabaw within me, haunted forever by this seemingly unchanging, yet continually changing, world of sea, sky and land.  I hope through this body of work to create awareness of the natural beauty of Ossabaw among my viewers, and to awaken as many as possible to the need to preserve this small paradise for all time.